In the earliest chapter of our company history, chance played a role. In 1910, the chemist Karl Höhn entered a small book and lithographic printing shop in Ulm, his hometown, to have his dissertation printed there. Apparently, an idea emerged from this order. In the same year, the then 30-year-old, investing his inheritance, acquired the business and immediately set it on a steep path of expansion. In addition to actual book printing, Höhn specialized in color printing, posters, advertising print products, and labels. 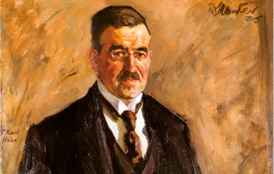 The “Printing Company Dr. Karl Höhn” soon became an established company, with state-of-the-art machinery, and in a position to serve major customers. A type foundry was established, a graphic arts company. The then-new offset printing process was introduced, and a little later, the company owned the most modern chemigraphic facility far and wide.

Who was this man with the instinctive feeling for entrepreneurial success? He came from a brewery in Ulm, which may explain his commercial vein, although he was later successful in a completely different field. If he were alive today, he would probably be called a ” technology freak” in contemporary youth jargon. He was fascinated by aviation, worshipped Count Zeppelin, loved and drove fast cars, and set up his own small cinema. Above all hobbies, however, was the company, which quickly crossed the threshold into an industrial enterprise.

When Höhn was asked after his school-leaving examination in Ulm in July 1900 what he wanted to do for a living, he said “technician”. He started studying at the Technical University in Stuttgart, but he moved to Munich to study Chemistry after a year. In 1907, he passed his exams, got married, and celebrated his first professional success – as an inventor.

His invention was a particularly economical, smell-free burning oil lamp. Equipped with an attachment, it could also be used as an aftershave warmer and proved to be a bestseller. After this success, Höhn completed his dissertation in Tübingen, where he was the first student to have his own car. Later, in 1927, his Swiss-built 95-horsepower Martini, which reached 125 km/h, was the fastest car registered in Ulm.

At this time, Höhn’s company was in full bloom. The number of employees exceeded 1,200, and the range of business fields had become even broader. The graphics company counted the production of securities among its specialties, which predestines it for a particular job: producing emergency money, which many cities issued after the First World War.

In addition to actual book printing, Höhn specialized in color printing, posters, advertising prints and labels. With the opening of the Biberach branch in 1912, a book factory was added. This was followed by the expansion of the bookbindery and the establishment of the company’s own cardboard box production. The latter, in turn, led to a new branch of business: the production of packaging for the food and luxury food industry, for soap and perfume manufacturers, which has remained a strong business segment of the HÖHN group to this day.
The cigarette manufacturer Reemtsma placed a large order with Höhn for cigarette boxes. Every evening in the 1920s, two vans loaded with labeled cigarette packs left the city for Hamburg.

Höhn had already entered the publishing business in 1917. Back then, in addition to journals and magazines such as “Die Tierwelt” (The World of Animals), “Kunst- und Antiquitäten-Rundschau” (Art and Antiques Review), and “Deutsche Briefmarkenzeitung” (German Stamp Newspaper), various daily newspapers were published under the successful entrepreneur’s direction. In 1927, the first issue of the “Ulmer Bilderchronik” (Ulm Picture Chronicle), which is still very well known today, was launched as a monthly magazine. At this time, the book production focused on city and local history, children’s books, animal books, and art guides.

The Ulm Address Book, first published in 1933 by the publishing house Dr. Karl Höhn, was already influenced by the National Socialist regime that had come to power. The regime did not tolerate free opinion and made life increasingly difficult for the publisher, who was conservative and committed to the nation yet did not conform with the regime. He was not a man who was willing to be brought into line. The bitter consequences were confiscations, the forced sale of the newspaper publishing houses, and finally even the revocation of his publishing rights. At one point, Höhn was even briefly imprisoned.

In the meantime, he considered fleeing abroad. But Höhn persevered, and soon after the war broke out, he realized that the oppression would not be the only consequence of National Socialist policy for him and his life’s work. However, he did not live to see the destruction of the old Ulm in the bombing war, including the destruction of his production facilities (and their later reconstruction). His life came to an end as early as 1942.